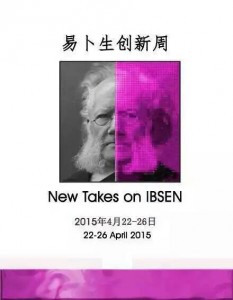 When We Dead Awaken

The Lady from the Sea

Performances Based on Ibsen’s Scripts:

Ibsen in One Take (directed by Wang Chong): April 23rd-24th

“New Takes on IBSEN” (Ibsen Today) is a series of script reading and performances in Contemporary shanghai based on Ibsen’s writings.  Director Wang Zecheng, founder of Tayao Drama Society, led the readings together with actress and student Zong Sijing. The reading covered most of Ibsen’s icon playwrights, including A Doll’s House, When We Dead Awaken,  Peer Gynt and The Lady from the Sea. Moreover Tayao Drama Society also staged one of the playwright by Ibsen, When We Dead Awaken.  Director Wang Chong, founder of Théatre du Rêve Expérimental, was also a part of New Takes on IBSEN in Shanghai by staging and touring Ibsen in One Take  in DaGuan Theater of Himalayas Museum. New Takes on IBSEN was curated by Ibsen International and Ibsen in China, collaborating with Tayao Drama Society and  Théatre du Rêve Expérimental.

“I have done these kind of script reading before, to put it simply, it is to select a script, do certain editing and selection first, and then invite friend who interested in either the play or the playwright to come to read and think. In this kind of activity, there is not much difference between the reader (performer)  and the listener (audience), everyone can be participating can become performers, so there is no need to worry whether you had any contact with theater, or know the plot, the characters or not, because this can be  a process for education and enlightenment. That is why during the reading, we would introduce some explanation and analysis to  everyone, of course, would add some background story for understanding. And this time we intend to introduce Ibsen’s works from  different stages, which includes Ibsen’s early  work Peer Gynt, well-known A Doll’s House,   and works appeared later in his life Lady from the Sea  and  When We Dead Awake ,  serving as a relatively rough overview  at  Ibsen’s work to  friends who are interested in drama. Such activities, on the one hand,  is to do some basic theatrical education to the mass people, on the other hand is to let more people taste the deeper charm of the theatrical world, which echoes with the ideal of “Let drama enrich  every each soul ” set when Tayao Drama Society first founded. Ibsen in One Take Ibsen in One Take follows an old man who is spending his last days in a hospital room. As the play unfolds, the man embarks on an introspective journey into his past and reminisces about his childhood and youth, his marriage and love affairs, the turning points as well as the shortcomings in his life. Throughout this reminiscence, the man, haunted by his private ghosts, confronts his regrets and tries to make sense of his existence and unanswered questions.

The production is the result of a 6 months-long work which firstly proceeded on parallel tracks and was then assembled and reworked during rehearsals. Director Wang Chong ideated the original storyline and handed it to Fiskum, who compiled the script enriching the plot with numerous quotes and references from Ibsen’s plays (like A Doll’s House, Ghosts, Peer Gynt, Master Builder and more). The creative duo then pieced the parts together, supported throughout the process by Hege Randi Tørressen, dramaturge of Oslo’s Nationaltheatret.

” ‘In life, every one is common and normal individual, however each of us has this inner fear, which we deals with in different ways, while he wants to realise drama’s possibility to express this commonality ‘ ”