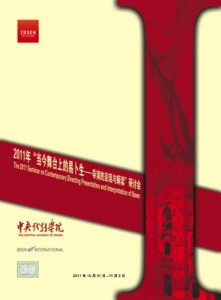 The seminar “Staging Ibsen Today” was conducted at the Central Academy of Drama in Beijing 31 October – 4 November 2011. Theatre makers from China, Russia, Brazil, India, and Norway shared their experiences and thoughts on staging Ibsen in their respective countries with an eager and inspired audience of students and professors. The seminar also resulted in a strong bond between the invited speakers and the Chinese hosts through the signing of the BRINCS agreement.

Welcome to Beijing, our friends from Norway, Russia, Brazil, India and other countries! We, the Directing Art Committee of the Chinese Dramatists Association, would like to extend our warm greetings to you, we are pleased to have you here together with the Chinese dramatists and scholars for the international seminar on “Contemporary Presentation and Interpretation on Ibsen” in honor of the great playwright, Ibsen.
Without doubt, Shakespeare is the most well-known foreign playwright in China, while Ibsen gives us the most profound influence on the development of Chinese dramas. Ibsen has been playing a significant role in many aspects, such as Chinese dramaturgy and performing art, emergency of China’s greatest dramatists, Chinese practitioners’ understanding and appreciation on dramatic functions and the development of theatrical ideas and even the definition of “drama” in Chinese. Some of his influence lasts to this day.

For a long time, the interpretation and presentation of Ibsen’s works was confined to realism and social problems by the Chinese dramatists to a great extent. Ever since the early 1980s, starting with the staging of Ibsen’s dramas like Peer Gynt, The Master Builder, and A Doll’s House, Pillars of Society, and Ghosts in many different versions, the Chinese dramatists have developed a deeper understanding of the practical knowledge about Ibsen’s poetic, rhapsodic, and metaphorical expression in his dramas. With more and more modern interpretation and international cooperation in recent years, it has been highly raised that Ibsen’s dramas have great vitality and diverse ways
of interpretation on the stage. All of these performances engage us in self-examination about whether the Chinese dramatists’ understanding of Ibsen’s “social dramas” is superficial? Ibsen’s dramas remain an enduring popularity in every corner of the globe for over 100 years, is it because the social criticism or the spirit inspired by the characters’ pursuit of personality freedom? Such questions may also enlighten us in the aspect of dramatic creation. Perhaps it is fair to say that a deeper and more thorough understanding of Ibsen’s dramas is in a way a deeper and more thorough understanding of dramatic art itself. To conclude, may the international seminar on “Contemporary Presentation and Interpretation on Ibsen” a great and complete success!

I have had the great pleasure to see Ibsen’s plays in many different cultures and contexts. Most of the times the play appears like it belongs in the country’s culture and certainly is recognizable as Ibsen’s text. Ibsen can probably be adapted to any culture. His themes are becoming more and more important and are modern issues. I often get the question: As Norwegian, please explain to us the real way of staging Ibsen? The answer to that is: If there was one way of staging Ibsen, the Norwegian way, Ibsen wouldn’t be world famous. There isn’t even one Norwegian way of staging him.
Ibsen International is proud and honored to partner with The Central Academy of Drama in China and China Theatre Association Directing Arts Committee for the seminar. We have invited keynote speakers from Brazil, Russia, India, China and Norway to present their experience of staging Ibsen today. This seminar is a rare opportunity to gain insight from directors’, from very different countries and cultures, work with Ibsen to day. This is what the seminar Staging Ibsen Today will focus on. I look forward to exciting presentations, intense dialogue and not least the beginning of cooperation with directors from some of the most important countries today. His hometown is Zhongshan of Guangdong. In October 7th, 1953, he was born in
Shanghai, China. He went to Longzhen Farm in Heilongjiang in 1970s and served
as agricultural workers. In 1977, he studied at Harbin Drama Theatre as an actor. In
1979, he became a student of department of directing in Central Academy of Drama
and graduated from there in 1984 with the degree of bachelor. In 1984, he served as a
director of the Central Experimental Theatre of China.

Wu Xiaojiang has directed and participated in the performance of three Ibsen dramas
in China, which are An Enemy of the People staged at Central Experimental Drama
Theater, A Doll’s House staged at Central Experimental Drama Theater, and Hedda
(Hedda Gabler) staged at Shanghai Theatre Academy. He also contributed to the
performance of Peer Gynt, a graduation work by the undergraduate students (Class of
1979) of the Department of Directing. He has attended the International Ibsen Seminars
held in Norway and China for several times, and published related papers. • Graduated in Theater (1989) and Culture Management (2008) in Rio de Janeiro, Brazil;
• Has been acting in a number of plays in Brazil for 22 years;
• Started a Cultural Production and Management company in Rio, TALU Productions, in
2003 and have been producing plays, shows and festivals since then;
• In 2006 produced and starred in “The Little Eyolf”, by Ibsen, which was on tour in Brazil
for 2 years. The play was selected to the Ibsen Festival in Oslo to represent Brazil.
• Created and produced the “Ibsen Festival” in Brazil in 2006, paying a tribute to Ibsen’s
centennial;
• In 2008 created and produced FESTLIP, an international Theater Festival with
participants from the eight CPLP (The Community of Portuguese-Speaking countries)
representatives: Portugal, Brazil, Mozambique, Angola, East Timor, Guinea-Bissau, San
Tome and Principe, Cape Verde. The Festival is preparing its 5th edition for 2012;
• Tânia has been invited by the Brazilian Federal Government to represent the cultural
area in the I CPLP Forum, to be held in Brazil in September, 2011;
• Toured all CPLP countries in 2009 organizing theater workshops based on Ibsen’s
dramaturgy , lecturing and teaching theater classes. More than 1.500 theater
professionals from all these countries were involved in this project;
• In 2009 was invited to participate in the “Theater Interchange Policies in CPLP
countries”, held in Coimbra, Portugal; Natalia graduated from The Surikov Art Institute and has dedicated herself to both
experimental and traditional arts. While having all kinds of amazing ideas and styles,
she is also known as a unique and original artist. She has attended many international
exhibitions held in Russia, Europe, and Asia. In 1989, she began to hold solo exhibitions
in Russia and foreign countries. The latest was at Moscow Manege International Art
Exhibition in March, 2011.
In May of 2011, as a director and designer, she staged her first piece of theatre works –
Ibsen’s Peer Gynt, produced by Moscow Drama Theory and Production Center. As an outstanding theatre director and teacher, Amal Allana has devoted all her life to
arts and made numerous achievements, which, like aesthetic principles, have produced
influences on every aspect of the social reality. She has made an extraordinarily
careful observation on human existence and combined her personal sympathy and
understanding with the international vision so as to obtain the general experience of
humankind. Inspired by the tradition of international theatre, her works, which seem
quite “Indian” but are truly “International”, have become an inter-cultural practice with
ideas that go beyond cultural and national narrowness and bias.
Since 2005, she has held the post of president of the International Theatre Institute in
New Delhi, head of the performing department in the Theatre Art and Design College,
and art director of a drama company under the Drama TV Association in New Delhi. In
2010, she started to work as chief director of the “Cultural Heritage” simultaneously, a
famous Indian contemporary art gallery.
Amal Allana graduated from the National School of Drama (India), and then
accomplished her internship at Berlin Philharmonic Orchestra and some other
theatres in Germany for two years. So far, she has directed more than 60 stage
shows and numerous TV series. She designed costumes for stage performance and
movies, worked as an exhibition planner, did research and writings about drama, and
participated in many other relevant activities. Meanwhile, she has never stopped her
theatre education in many well-known institutions.
Parts of her stage works: Aadhe Adhure, The Good Person of Setzuan, Khamosh!,
Mahabhoj, King Lear, Himmat Mai, Begum Barve, Erendira & Her Heartless
Grandmother—based on one of Márquez’s short stories, Nati Binodini—based on
the autobiography of Binodini who was an Indian stage performer in the 19th century,
Metropolis—premiered at Ibsen Festival in 2009, based on the Bombay terrorist attack
on November 26, 2008 and adapted Ibsen’s three works, Rosmersholm, Hedda Gabler,
and A Doll’s House. Yngvar graduated in architecture major, and he now works and lives in Oslo of
Norway. His work ranges from architecture design and museum exhibition to
performing arts. In the past 20 years, he has participated in more than 40 pieces
of stage works, which covers modern dances, new operas, as well as traditional
dramas. He used to work in many major theatres in Norway, Sweden, Denmark,
Poland, and Germany.
Yngvar Julin has already cooperated with Ms. Engel, art and management
director of Ibsen International, on some contemporary arts based on Ibsen. They
endowed most of Ibsen’s works, such as A Doll’s House, Rosmersholm, The
Wild Duck, Lady from the Sea, and many other works, with new concepts in an
amazing and surprising way at Norwegian Ibsen Theatre. Many of Julin’s works
have been staged at the Ibsen Theatre Festivals in India, Bengal, and Norway.