Ibsen in one take 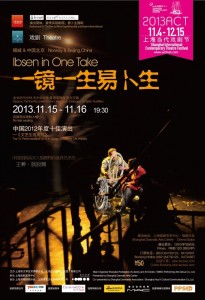 Wang and Fiskum distilled characters, themes and dialogues from all of Henrik Ibsen’s 27 plays into the life story of one modern Chinese man (…)  a lovely play with the laws of film and theatre (…) Ibsen In One Take is Von Trier’s Dogville on a shoestring budget

Ibsen in One Take is neither a medley of Ibsen’s masterpieces nor an original pièce inspired by Ibsen’s work. It is both these things, and more.

Born of the collaboration of up-and-coming Chinese director Wang Chong and Beijing-based Norwegian playwright Oda Fiskum, Ibsen in One Take is a bold attempt to rework the Ibsenian tradition into a piece of new writing. The result is a combination of classics and novelty, a slice-of-life from a contemporary Chinese man’s existence which also reverberates with the echoes of Ibsen’s philosophical and moral dilemmas. In producer Inger Buresund’s words, a “modern Chinese story told in a contemporary yet universal way”.

Ibsen in One Take follows an old man who is spending his last days in a hospital room. As the play unfolds, the man embarks on an introspective journey into his past and reminisces about his childhood and youth, his marriage and love affairs, the turning points as well as the shortcomings in his life. Throughout this reminiscence, the man, haunted by his private ghosts, confronts his regrets and tries to make sense of his existence and unanswered questions.

The production is the result of a 6 months-long work which firstly proceeded on parallel tracks and was then assembled and reworked during rehearsals. Director Wang Chong ideated the original storyline and handed it to Fiskum, who compiled the script enriching the plot with numerous quotes and references from Ibsen’s plays (like A Doll’s House, Ghosts, Peer Gynt, Master Builder and more). The creative duo then pieced the parts together, supported throughout the process by Hege Randi Tørressen, dramaturge of Oslo’s Nationaltheatret.

A remarkably innovative trait of the pièce lies in its dramatic structure, which represents a further development of Wang ’s previous experiments with live video-recording on stage: the whole performance is filmed by a cinematic troupe who follows the actors around the stage, and projected in real time on a big screen right above the stage. Hence the performance’s name: the “one take” of the title is an actual camera take which captures the stage action from beginning to end, without any editing or montage. This dramatic device allows the audience to focus on either the stage action or its filmic rendition at will. What’s more, the free play of the two levels (stage action and film) generates an extra, self-referential layer (the filming of the stage action). The performance, in other words, is structured along different layers which continuously interact and question each other in terms of authenticity, artistic medium and emotional response.

Commissioned by Ibsen International for the project Ibsen in China 2012 in collaboration with The Norwegian Embassy in Beijing and The Norwegian Consulates General in Shanghai and Guangzhou. Produced by Théatre du Rêve Expérimental A boy lies on his back on stage. He cuts origami figures from a sheet of pink paper. A screen of white cloth separates him from his parents, who talk about him behind the screen. While acting, the actors are being filmed by a team of camera men. Their images appear live on a big screen above the stage. On the screen it seems as if the boy lies on the ground in front of his parents. The contrast between the film image and the setting on stage suggests that the talking parents only exist in the boy’s imagination.

Ibsen In One Take is the fruit of a remarkable cooperation between the Chinese theatre director Wang Chong and the Norwegian stagewright Oda Fiskum. The show enjoyed its Dutch premiere during festival De Keuze (The Choice) of the Rotterdamse Schouwburg (the city theatre of Rotterdam). Wang and Fiskum distilled characters, themes and dialogues from all of Henrik Ibsen’s 27 plays into the life story of one modern Chinese man. We see him as a little boy, as a young man and at the end of his life. Ibsen In One Take has the form of a retrospective: old, ill and weakened, the man sees his life draw past him in a series of flashbacks. The last three words of the title refer to the filmed half of the show, shot live and in one sweeping take without a single interruption, let alone any editing. Of course, they also refer to the new jigsaw puzzle Wang and Fiskum have laid out of all those hundreds of little Ibsen-pieces.

By combining film and acting Wang has doubled the space for his own imagination, and therefore also for ours. What we see on stage, continuously and simultaneously gets a different meaning on screen. Lovely is a scene early on in the play, when the man as a boy squats on the floor while his father scolds him. At first he shouts in the boy’s face. Then, suddenly, the boy changes position, but the father keeps scolding in the direction of the spot the boy has just left. On screen, however, they still seem to be looking each other in the eye. Normally it is the film director who edits separate scenes, shot at different places and times, into one fluid whole. In the scolding sequence Wang creates the separate scenes on stage – a lovely play with the laws of film and theatre.

The story of the show is of all times. The man grows up at the mercy of his father’s inability to forge an emotional bond with his son. When he receives his colleagues from work at his home, the boy is wheeled out like a circus animal, to show off his feeble mastery of the recorder. The moment they have left, his father scolds him again: ‘You know I hate the sound of that thing!’ This upbringing leads unavoidably to a failed marriage – the man cannot give what his father withheld from him. His relationship stays childless. His wife wants to leave him, but cannot bring herself to take the leap. The man ends up alone in a hospital bed, terrorised by a rude nurse. A girl with coloured balloons appears, the symbolic messenger of the nearing end of his life.

The emotional handicaps, the not-listening, the not-seeing, the indecisiveness of the characters – it is all painfully recognisable Ibsen. But with the help of his two dimensions, Wang also sculpts this material, just as recognisably, into present day China. Children who see their own way blocked by the ancient Chinese tradition that they should take care of their parents when they become old and needy. The economic necessity forcing them to work night and day, causing estrangement from their loved ones.

The ultraquick changes of clothes and position by the actors, the camera men trucking around with their equipment: next to the show itself, the simple means with which Wang has created it are constantly in full view for the audience. That gives it a vulnerable quality, stirring and touching in equal measure. Ibsen In One Take is Von Trier’s Dogville on a shoestring budget. The only uneasy aspect is the music by Zhang Yuelong. It is very beautiful, but also very loud.

The end is wonderful. The old man sees himself, and the other people he shared his life with, loom up one last time in circles of light. The moment he tries to hug them, they disappear in the darkness. White smoke envelops the stage. The circles of light merge into a path, allowing the old man to walk to his death.