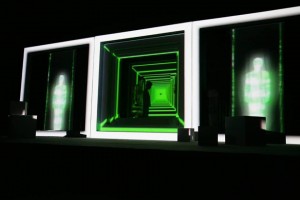 THE ART IS QUICKER THAN THE EYE?

A conversation on New Media and Theatre

Historically, theatre and performing arts have fulfilled a crucial role: to challenge the audience to look “beyond the visible”. Relying on their skills and technique, performing artists presented a staged reality for the audience to empathize with and reflect upon. By subscribing to a temporary “suspension of disbelief”, the audience would enter a dimension fabricated by the performers and, together with them, look at the world from a different angle.

In recent years, installation art has pushed this concept to unprecedented limits. Through instruments such as motion capture, video mapping, interactive sound technology and others, it is now possible to alter the audience’s perceptions to create a convincing “other” reality _ to “trick” the spectator’s senses leading them into a devised world. What theatre once did through the suspension of disbelief is now achieved by technical means.

Most interestingly, new media have often shown their aesthetical potential at its best precisely in performing arts’ works. However, as it is often the case with a new gimmick, they sometimes end up taking the center stage and turn the performance into little more than a display of technical virtuosity.

Can new media open up new horizons for theatre? Or do they shrink its scope? Do new media change the relationship between performer and spectator? Or do they push the audience back to the position of passive recipient? In this open conversation new media and theatre artists from China and abroad join together to explore these and other questions.